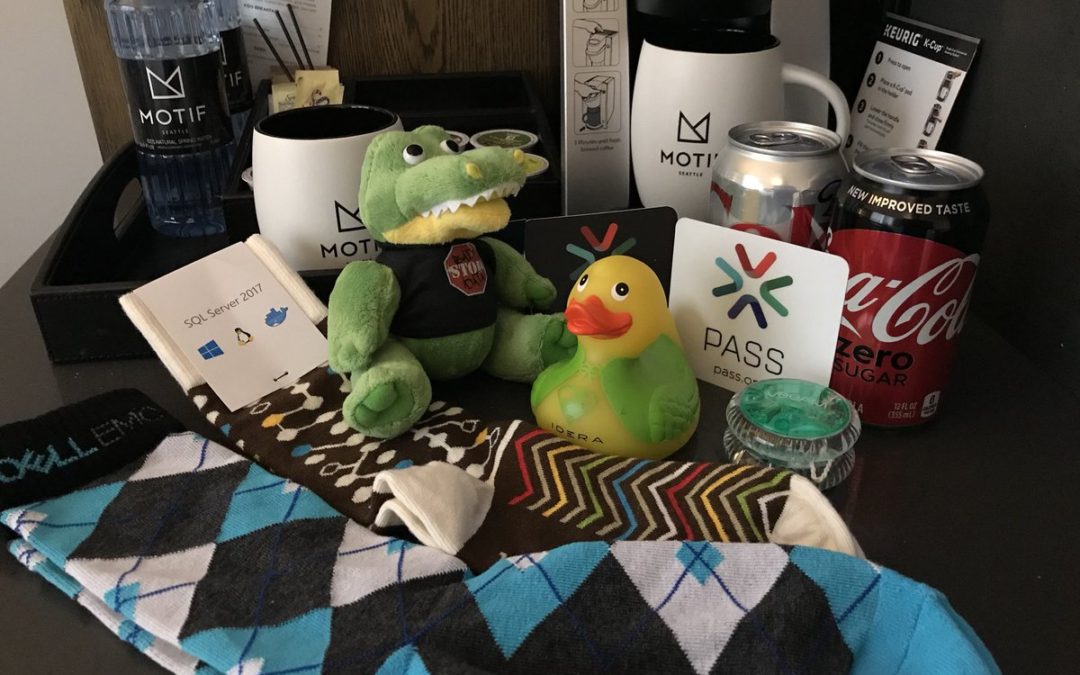 Two weeks ago I joined my fellow colleagues from Key2 Consulting at the annual PASS Summit conference held in Seattle, Washington. Click here to see part one of my Twitter recap of the event! This article is part 2 of that recap.

Day two started with a keynote called, Globally Distributed Databases Made Simple, delivered by the awesome Rimma Nehme. Rimma has previously worked at Microsoft Gray Systems Labs and Microsoft Research, and holds a PhD in Computer Science from Purdue University and an MBA from the University of Chicago. She has spoken before at PASS Summit, and this keynote – like the ones before – was loaded with great information. Thankfully she recently tweeted that her slides from the keynote are available for all to review.

Unfortunately I did not find the recorded keynote posted anywhere at this time, but I did take one slide from her keynote though, and shared some slight humor on Twitter, even garnering a like by Rimma herself.

The second day of PASS Summit 2017 was filled with several sessions I didn’t want to miss. As I was running around, I was occasionally checking the Twitter feed and hashtags around the conference. I was even caught doing so by my good Twitter friend, Thomas LeBlanc.

During one particular session led by Ken Van Hyning aka SQLToolsGuy and Eric Kang (both from Microsoft) called, DevOps with SQL Server 2017, I took one photo of a recap slide and posted it to Twitter. Low and behold, that tweeted image would be the most active and engaging tweet I’ve ever had on Twitter, as the future of DevOps Tools looks very bright!

With day 2 at the conference ending, I gave Twitter shoutouts to the speakers of the sessions I attended.

After a full second day at the conference, the Key2 crew made our way to our yearly destination at Rhein Haus Seattle for bier, brats, and bocce. That night, Key2 crowned new bocce ball winners.

On the third and final day of Pass Summit 2017, there was no additional keynote so sessions started promptly at 8 AM.  With the early start, I made it to the session Build a Performance Monitoring Toolset for SSAS Using Power BI, presented by a dear friend of our company, Shabnam Watson.

After the first Friday session, I made it to the packed house that had Brent Ozar’s “But It Worked in Development!” – 3 Hard Performance Problems. The session was great! Brent is an engaging speaker and for a Friday morning session after many folks enjoyed a Thursday night beforehand in Seattle, it was great to be entertained and educated by such a dynamic speaker.  Brent even commented on tweets I made, capturing some of the highlights from the session.

Following Brent’s phenomenal presentation, I had the luxury of listening to more dynamic speakers. William Wolf aka SQLWareWolf and Patrick LeBlanc, presented Who’s on First? SQL Server statistics & Dynamic Power BI Visuals!Suffice it to say, I got a couple of great tweets from the session.

For the last session of PASS Summit 2017, I made sure to go to the session on SQL Graph, Building a Graph Database Application with SQL Server 2017 and Azure SQL Database, presented by Shreya Verma and Arvind Shyamsundar.  There was a lot covered here but thankfully, there was some great live tweeting from another session attendee, Markus Ehrenmüller, so I will be sure to go back to his tweets to fill in blanks to the notes I took.

And as before, I ended the final day with shout outs to the wonderful speakers.

So another PASS Summit is in the books. I did however, make a point to reach out and meet a PASS Twitter friend, Harry Chandra, whom I’ve known since 2012, but never got to meet in person until now.

And what’s a PASS Summit without snatching up some cool SQL swag!

So in all, thanks for following my Twitter recap.  Let’s do this again, next year in Seattle for PASS Summit 2018!